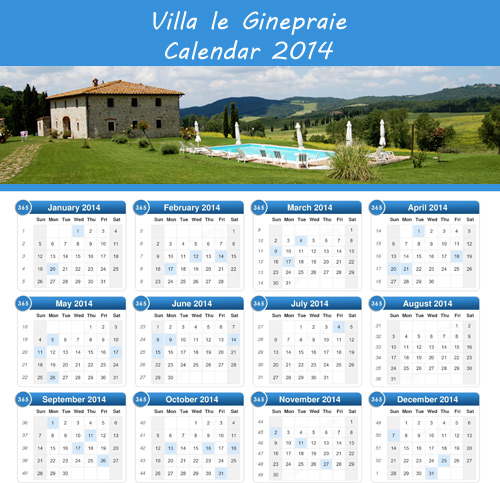 2014 calendar with periods and the rates to be able to rent our villa in Tuscany.
After the winter closing our Tuscan villa will open in April

May:
From May  the 1st to May the 5th: middle season
From May the 6th to May the 30th: low season
from may the 31st begins the season average

June:
from june the 1st to June 27th: middle season
From June 28 begins the season

In the months of April, May and June, it will be possible to rent the entire villa just for a weekend, arriving on Friday evening and departure on Sunday afternoon. This can be useful for those who want to spend a weekend outdoors, finding himself with friends, with  cooking lessons, yoga classes, horseback riding, massages, wine tours and tastings various
In recent months, it is also possible to rent a portion of the villa or the individual apartments and rooms.

July and August:
from June the 28th to Augustthe  29th : High Season
During these two months the house is rented on a weekly basis from Saturday to Saturday.
In summer, the villa is in fact leased to two or three families with children while maintaining their privacy want to spend a week in Tuscany

September:
From August the 30th to September the 19th: middle season
From September the 20th to September 30th: low season
In this month as for those spring, we rent the house for even a weekend, you can also rent both apartments and rooms in Tuscany the time is still warm, you can use the swimming pool, visit the art cities or use of the services that the villa offers its guests.

Visit the pricing page for the villa in Tuscany in 2014