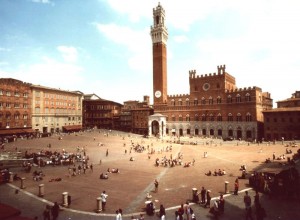 PIAZZA DEL CAMPO. The main square in Siena is one of the most emblematic and complex urban areas in the world and has served as a model for architects and city planners. The sloping piazza follows the original incline of the valley, just as its original shell shape was dictated by the garland of palaces that once stood on the old Via Francigena. The Campo is the true heart of the city, the arena for key events over the centuries and the age-old venue for the thrilling races of the Palio. It is bordered by beautiful palaces, some of which still preserve their medieval aspect. Other have been remodeled in subsequent periods, either in baroque style or early neo-gothic. At the northern end of the paved brick piazza stand the FONTE GAIA. This is a 19th century copy. The original, sculpted by Jacopo della Quercia in the first half of the 15th century, has been moved to the Spedale di Santa Maria della Scala.